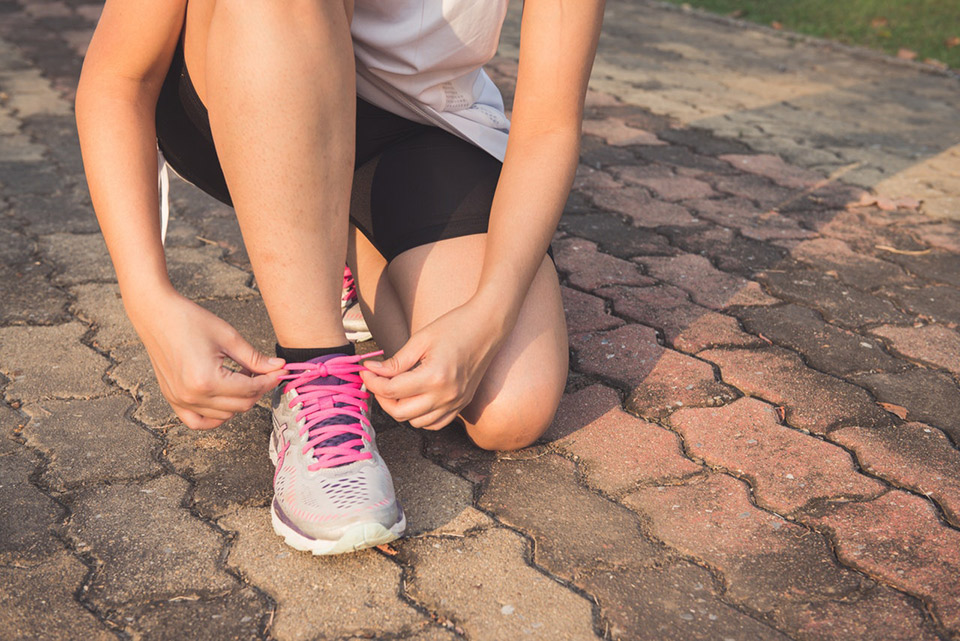 Come January and the congestion down our country lane is horrific – there’s no place to pass let alone accelerate.

And it’s not cars that are to blame but joggers… everywhere you look there are men and women jamming up the roads in an attempt to get fit.

They normally emerge from their front doors on January 1st blinking against the shock of the sunlight after being cooped up in front of the TV for two weeks. The last crumb of sausage roll still clings to their upper lip and they are wired up with enough electronic gadgetry to take them to the moon – let alone round the block.

Dress is either a grubby tracksuit found festering in a gym bag from the January before or head to toe designer Nike (this having been bought as a Christmas present to themselves as everybody else wouldn’t waste their money knowing it will be worn as often as the recipient’s tuxedo).

According to research ‘getting fit’ is the front runner in the New Year Resolution stakes closely followed by ‘losing weight’ and ‘giving up smoking’ with ‘spending more time with family and friends’ lagging some way behind.

But sadly the average time a person actually sticks to these Resolutions is 17 days.

It seems ridiculous that most gyms offer ‘two weeks free membership’ at the start of every New Year. This is clearly to lure new recruits in and then convince them of the joy of running for hours on the treadmill in front of SKY News – all for just a few squillion pounds a week.

In fact statistics show that over half of these recruits do their two free weeks then flee back to the comfort of their armchair quicker than you can say direct debit.

Of the others a small percentage struggle on but as each month passes their usage falls off. As one member of a private fitness club told me, “I worked out that I was only going swimming once a month which worked out at about £30 a length!”

Psychology expert Dr David Hardman from London Metropolitan University says people need to be realistic about what they can achieve, and to take their time.

“People think that by paying a huge amount of money to join a gym that it will force them to go,” he says.

“Yet this ultimately isn’t the case for most in the long run – a couple of months later and you’ve forgotten the money still coming out of your account.”

Cliff Arnalls of Cardiff University who last year determined scientifically that January 24th was the most depressing day in the calendar, said people would be better off waiting until February before they joined a gym.

“Anecdotal evidence shows February 1st would be a much better date to start going to the gym – as you are doing it for yourself rather than societal pressure”.

The tradition of New Year Resolutions actually goes all the way back to 153BC when Janus a mythical King of early Rome was placed at the head of the calendar.

With two faces, he could look back on past events and forward to the future. Janus became the ancient symbol for resolutions and many Romans looked for forgiveness from their enemies and also exchanged gifts before the beginning of each New Year.

Quite how and when the Ancient Kings of Lycra and Velcro took over the throne and demanded we all take on to their mythical properties, is not clear. But they certainly have a dedicated following. And not only on the highways, byways and in gyms but also in the privacy of our homes.

We are now downloading, streaming and googling more health and fitness information than ever before one mega-byte at a time. Come January 1 and social media channels are full of smug photographs of individuals hurling themselves into freezing seawater for that ‘bracing New Year dip’ or blitzing items of green produce into that ‘New Year smoothie’

It is staggering just how much we all spend on the pursuit of the ‘body beautiful’ – literally tens of thousands of pounds in January in the UK alone (the equivalent of at least three million family packets of chocolate Hob Nobs).

But here is one way this extra expenditure can be budgeted for – instead of holding a party at Christmas, delay it until January. You can guarantee that at least half your guests will jog to the party so look far worse that you do, therefore saving on the pressure to buy a new outfit. Drink need be limited to tap water and the odd bottle of diet coke (caffeine-free as most will have given that up too). And as for the buffet, a few plates of fresh air and the odd organic celery stick should do it.

Best of all, they’ll be no need to fork out for a disco as most of the guest will be too exhausted and malnourished to even stand up let alone dance!

So the message from JogOn is why not keep it simple and get yourself out for a jog. Even better combine getting from the couch to a 5k whilst donating to a charity. If you’re in the Berkhamsted area then come and join our Hospice Couch to 5k or one of our other courses. Committing to a 10 week course isn’t a longer term commitment, like a gym, and running as part of a group certainly helps get you out when there’s times you really don’t feel like it.

Whatever you do enjoy it, mix it up, arrange to meet up with a friend, set your goals. With running mix up the terrains and distances you run, set a time, distance or an organised race as a goal. Jog On supports one of the parkrun aims, that running is about bringing people together with a visit to a local cafe positively encouraged after a run (not the cake though if you ditched it as one of your New Year Resolutions)!