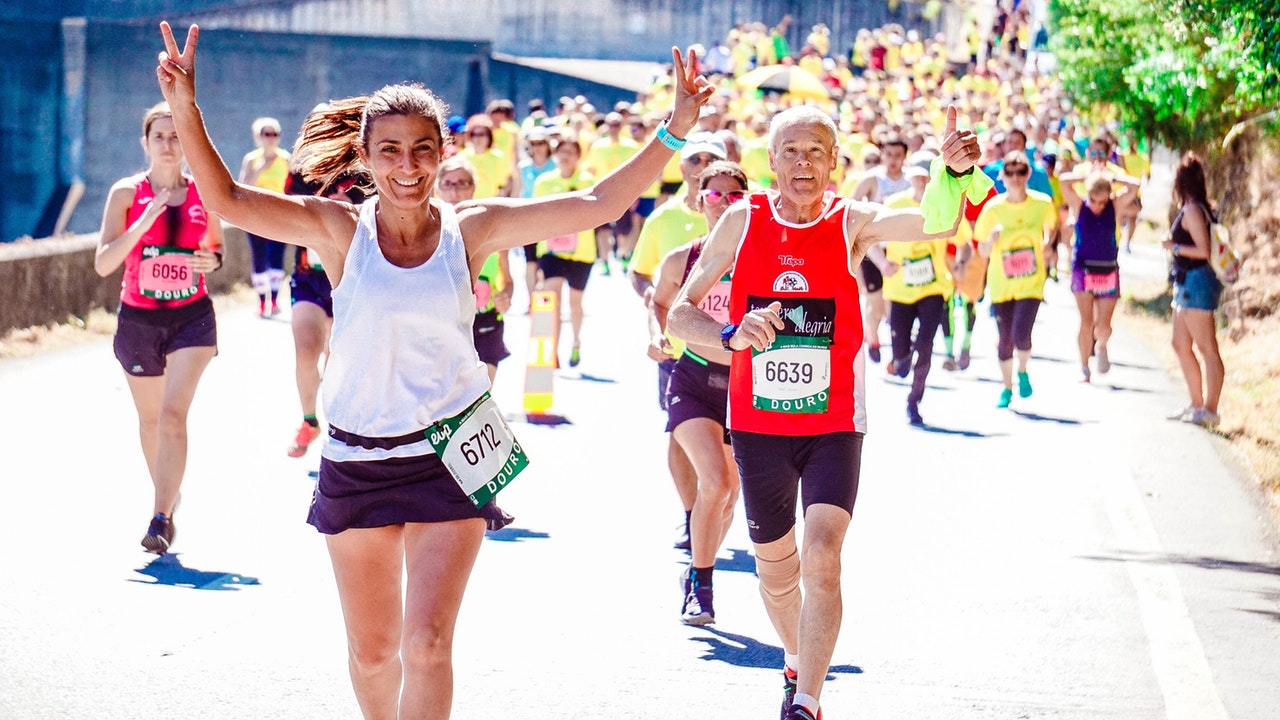 Run 10 miles in the morning and 10 in the afternoon, only run up to 9 miles, run three times a week, run six times a week, eat porridge/beetroot/peanut butter oh and definitely do – or perhaps don’t – carbo load and stretch.

Just some of the conflicting advice sitting there on the internet waiting for eager prospective marathon runners to digest one megabyte at a time.

Because that’s the trouble with running 26.2 miles, everyone in the running world – and those who’ve never pulled on a pair of trainers let alone a muscle – has an opinion on it. And some make a lot of money convincing us that if we sign up with their training plan/nutritional advice/weekly magazine/ hardback book /PT sessions – we will run happily along enjoying every minute, never hitting the wall and break that coveted PB with ease (oh and recover enough to do it all over again the following Sunday).

The truth is we are all very different. Watch any long-distance race and what strikes you is how many shapes, sizes and ages there are out there clocking up the miles. And how many times have you been overtaken by someone who looks twice your age and weight but also clearly has twice your stamina? At her first marathon, my friend was overtaken in Edinburgh by a man smoking a Marlborough Light (well it was the 70s!).

Training plans are a handy guideline but think about it – how can a generic plan be applicable for a 20 year old junior doctor who is working 16 hours a day in a stressful job to a 23 year old student who has three days off a week to train and time for regular meals and physio or a 60 year old retired man with every day to train but hasn’t run since the 100 metres (in those days yards) in his schooldays.

The same goes for nutrition – some runners, like Goldilocks, thrive on porridge whilst others prefer the Three Bears approach and hit the honey on bagel combo. The latest science on beetroot and espresso before a race may be compelling but for some this has them charging for the nearest bush faster than the Athens’ Radcliffe squat.

You are far better tracking down your local running coach (not difficult as most towns now have some kind of running club obviously none quite like JogOn) for some general tips taking into account your time constraints, fitness levels and goal whether it’s to finish in one piece or to hit a time target.

The most useful thing anyone told me about marathon running was ironically the importance of not running. As ‘athletes’ (especially those with training plans) we are very good at running but not so good at sitting still. We run through illness – convincing ourselves it’s just a cough despite having a raging chest infection and a temperature hitting boiling point. We run through injury convincing ourselves we can ‘run off’ a torn hamstring, screaming achilles tendon and arthritic knee! We panic if we have to have a week off – when in fact it’s amazing often how much stronger you feel after a few days of marathon Box Set viewing.

The man reason people don’t complete a marathon is because they never start it (OK or it gets cancelled by a mass virus pandemic but hey when will that ever happen?). They over train – ignore the clear messages from their body – and end up being forced to watch it on TV (in the case of London) or see the smug Strava graphs as they sit with multiple ice packs swallowing antibiotics.

And even if this does happen, yes, it’s disappointing but remember it’s not the Olympics. No amateur marathon runner has to wait four years to run 26.2 miles against the clock – in 2020 there are over 200 organised marathon events all over the UK ( so even if your large event – London/Paris/Rome/Edinburgh is cancelled look for a smaller local event – perhaps Milton Keynes – and head off with your hands double-Happy-Birthday washed, to the start line). Please note if you want a recommendation, just ask another runner because as the saying goes…

Q. How do I know if someone has run a marathon?

A. They’ll tell you!